By: Paige Worthy | October 30th, 2012 You guys. We’re getting an Eataly. EATALY. Yes, this high-end gourmet food hall, brought to the states by Michael and Lidia Bastianich and Mario Batali, King of the Orange Crocs, has finally found its second American location, and it’s right here in Chicago. Soon, native Chicagoans and tourists alike will.

We’re getting an Eataly. 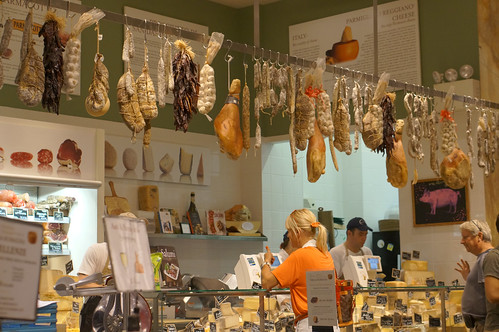 Yes, this high-end gourmet food hall, brought to the states by Michael and Lidia Bastianich and Mario Batali, King of the Orange Crocs, has finally found its second American location, and it’s right here in Chicago.

Soon, native Chicagoans and tourists alike will be able to get a taste of today’s Italy without venturing down to Taylor Street, which some consider to be the equivalent of the South Pole.

Next September, Eataly will move into the more than 60,000-square-foot space formerly occupied by the ESPN Zone sports bar and arcade, which closed in 2010. It’s on Ohio Street between State Street and Michigan Avenue, a fantastic location for tourists and Chicago residents alike to enjoy the gourmet wares and restaurant offerings.

Eataly is a Turin-based chain with locations in Italy, Japan and the United States. The New York location is in Manhattan’s bustling Flatiron District. In addition to its retail offerings of everything from dried pasta, sauces and olive oils to cookbooks and utensils, Eataly also features 6 restaurants and even more stands and other spots to eat, drink and enjoy the bustling surroundings. Among them are a coffee counter, gelateria, fish restaurant, vegetarian establishment and, of course, somewhere to nosh on pizza and pasta.

Eager to cater to our Midwest sensibilities, Michael Bastianich promises an expanded sausage offering at Chicago’s Eataly outpost, including a grill-style restaurant with a focus on the encased meats we so love.

Sure, we still miss the air hockey tables at ESPN Zone, but we’ll always have Dave & Busters for that — and there are hundreds of places to watch sports here. But after next year, there will be only two places to experience the sights and flavors of Eataly in America: New York City and, at long last, Chicago.

This will quickly become a major Chicago tourist destination, and we couldn’t be more thrilled — hordes of tourists will flock here for a taste of Italy that they could only get abroad and in New York City before.

Next, maybe Mario will want to open a second Babbo location in Chicago… Well, we can dream.

Oh, and until all this goes down?